The Skater’s Night Before Christmas 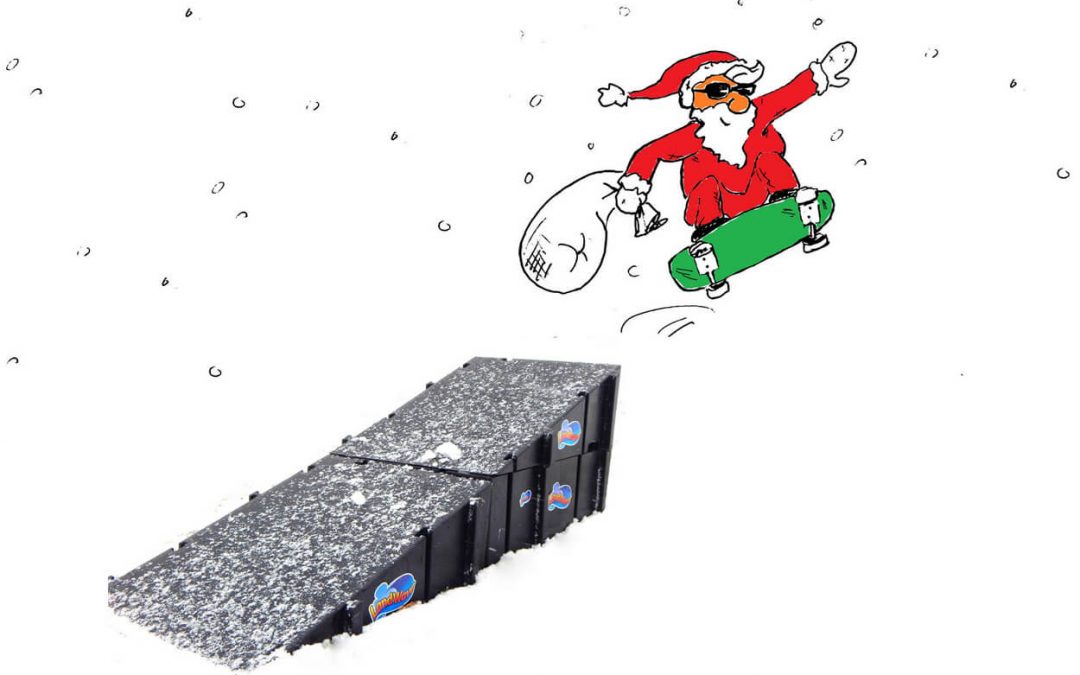 Twas the night before Christmas, the skatepark was filled.

They thrashed up the Landwave ramps, they dreamed they would build.

From smith grinds to kickflips and catching some air,

To somebody ollieing all the ten stairs.

The children were slamming and falling down on their heads,

Which later would land them all in their beds.

At home asleep the visions they had,

Were from the last session, the good and the bad.

And my lady and I were snuggled to sleep,

Dreaming of skating a bowl that was deep.

When out on the Landwave ramps I heard such a noise,

Is it St.Nick delivering his toys?

I went to the window to see what it was,

Maybe a skater being harassed by the fuzz?

The moon on the ramp, the glow of the snow,

Could someone be skating the Landwave ramps down below?

Then all of a sudden it dawned on me here,

There they were skateboarding, eight tiny reindeer.

With an old man in red, his tailslide so quick

I knew in that moment it must be St.Nick.

Boardslides to nosegrinds I named the tricks as they came,

He cheered them on calling them all name by name,

“To the top of the lip! Try not to fall!

I never thought I would see such a day,

Santa on a skateboard instead of his sleigh.

Then pop went the ollies onto the housetop,

They flew right above me not making a stop.

Then in a bang I hear on the roof

The sound of wheels being pushed by a hoof.

As I flew down the stairs, and turned around…

He slid down the chimney and did an invert on the ground!

His heelflips were double and something to see,

He landed them perfect and switch, I believe.

A bundle of skate supplies he had in his bag,

All the goodies you’ve wanted in a skateboard mag.

His shoes were not boots but Vans with torn laces.

You could tell that he’s skated many different places.

I had a new respect for this jolly red man,

He was doing tricks I never could land.

He started to skate he wasn’t fallen…

Could it be? Was this Rodney Mullen?

He had a round face that matched his round belly

That shook when he ollied like skating streets in Philly.

All the tricks that he could stick,

There was no doubt that this was St.Nick.

A stomp on the tail, the board in his hand

He ate all the cookies and did the tricks he could land.

And now back to work to finish some things,

He filled up the stockings with top notch bearings.

And laying a finger aside of his nose,

He did a nine-hundred up the chimney he rose!

He landed it clean and rejoined his team,

They seemed so stoked if you know what I mean.

As they skated away I heard him shout…

“Merry Christmas to all those who skate, peace out!”

Wishing your friends, family, and everyone in between a spectacular Christmas with lots of love and holiday cheer to last throughout the year.